Demographics are Not Destiny

We keep hearing statements like “housing starts have exceeded demographics and it is time for a pause”.  I’m not convinced that demographic analysis can tell us reliably what we should expect in the housing market.  Don’t get me wrong – I spend a fair amount of time working with demographic models.  I think we can learn a lot from this kind of analysis. But, we should not use demographics to forecast what might actually happen.

The core premise of a demographic model is that the size of the population (by age group) will dictate how much housing is needed, and therefore how much housing should be produced each year.    There are several key inputs to these models:

This article looks at these two sets of data, for British Columbia, and produces some estimates. Then, a look at housing starts finds that actual housing production almost never comes even close to matching the demographic requirements.

About population: as I discussed in the May report, the rate of population growth varies over time - growth moves in waves. Secondly, for British Columbia, the rate of growth has slowed. During 1976 to 1997, the growth rate averaged 2.1%.  For 1997 to 2013, the growth rate averaged 0.9% per year.  I argued in the May report that this slowdown has a lot to do with shortages of building lots and price growth, which has discouraged in-migration from other regions of Canada.

Using a demographic model (which includes analysis of migration as well as expected births and deaths) I project that the population of BC will grow by about 55,000 per year during 2011 to 2031, or 1.1% per year.  The table below summarizes my projections of population. 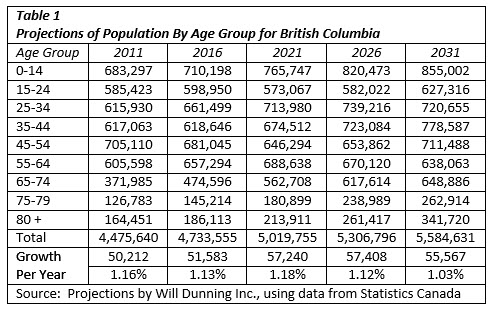 Disregarding this history, I have gone ahead and projected housing requirements for British Columbia, based on an assumption that household formation rates will remain at the 2011 levels.  Combining the projections of population (by age group) and household formation rates (by age group), potential demand is estimated at 24,500 dwelling units per year during 2011 to 2016 and 27,400 units per year during 2016 to 2021. 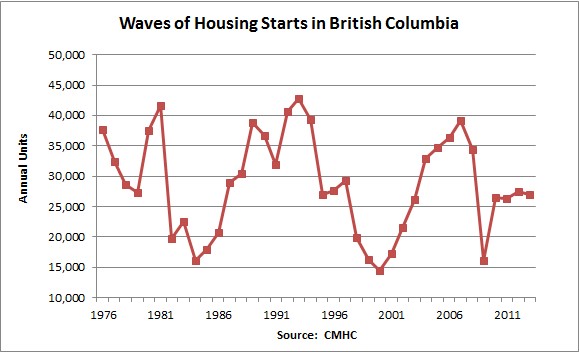 Variations in housing starts have a great deal to do with changes in economic conditions, especially job creation and housing affordability. Figure 3 (below) contrasts housing starts with my favourite economic statistic:  the employment-to-population ratio (or “employment rate”) is the percentage of adults who have jobs.  When the employment rate is rising, it means that employment is growing more rapidly than the population, which is surely a good thing.

In this chart we can see a very close relationship between the employment rate and housing starts – most of the time, but not all of the time.  There was a major exception during the late 1990s, when the employment rate fell slightly but housing starts fell fairly sharply.  Another important factor came into play: house prices in BC rose very rapidly during the first half of the 1990s, in absolute terms and relative to the rest of Canada (in the late 1980s the average house price in BC was about the same as for all of Canada; by 1995, the BC average was 40% higher than for all of Canada).  By the second half of the 1990s that was a big deterrent for in-migration to BC, resulting in a sharp slowdown of population growth and housing demand.

But, there is one big issue here: the level of housing starts looks low relative to the employment rate.  I think that’s because housing prices in BC remain very high: the average resale house price in BC is still 40% higher than the average for all of Canada.  This is reducing migration into BC and thereby impairing housing activity. If the BC versus Canada price gap was smaller, there would be more migration into BC and more housing starts. 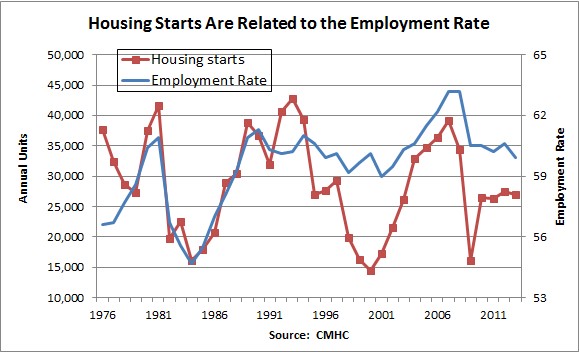 Here’s what I take away from this: